skip to main | skip to sidebar

Another new version of Criticality (two in a week!), this time I have added attrition mode. I've created this based on gameplay mentioned in a question on the stack exchange gaming beta.

In this mode, exploding pebbles do not capture neighbouring pebbles instead when they move onto an enemy space they eliminate themselves and one of the enemy pebbles. So far, my experience suggests that this can make for a very long games, i.e. it quickly becomes a war of attrition.
Posted by boz at 09:22 No comments:

I've finally uploaded a new version of Criticality. This version fixes a Force Close bug that was happening at the end of some games.

I have also added some new options, in particular you can name your player and alter player colours. The colour picker is fairly basic, but will do as a starting point.
Posted by boz at 09:55 No comments: 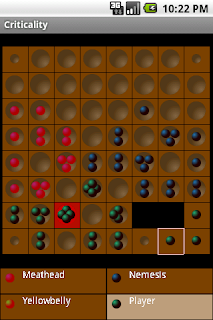 I've just released a fairly basic android game called Criticality to the market. We'll have to see how it does.
A long time ago my friend Mark (who, regrettably, I have long since lost touch with) showed me a game he had written on his Amiga (the original rules available in the Criticality options are pretty much the same game).
Over the years I've written a few variants on the game whilst learning different languages and frameworks, but this version introduces some significant differences.

Available on the Android Market